The Swedish Farmstead at Tinicum

This monolith was erected by the Swedish Colonial Society in 1923.

WHEN: Every first Saturday of the month from 11 AM to 2 PM

The Swedish Farmstead is now open! Tinicum Township has completed its improvement of Governor Printz Park and The Swedish Colonial Society has completed its Farmstead reconstruction project. While we’re still adding some finishing touches, we’re ready for your visit. We hold an open house every first Saturday of the month from 11 AM to 2 PM and we’re open plenty of other times too.

The Swedish Farmstead was originally built in 1988 as a living history museum in Bridgeton, New Jersey, in order to commemorate the 350th anniversary of the founding of New Sweden and to show how a Swedish settler family lived. Seven log cabins were built and maintained for about a decade by the NJ nonprofit, the New Sweden Company, many of whose members were descendants of colonial Swedes. The builder was the Swedish craftsman, Gunnar Zetterqvist, who derived his ideas about 17th century log construction from the many well-preserved historical log cabins that stand in his native land. The Farmstead was for years a popular destination for schoolchildren and adults. However, by 2015 the Farmstead had long been closed and in a state of dilapidation. The New Sweden Company decided to try to find a new home for it. Serendipitously, Tinicum Township was in process of making extensive improvements at Governor Printz Park, the very site of Printz’s capitol that he established in 1643. Through the intercession of The Swedish Colonial Society, conversations took place and the township welcomed the idea of having the Farmstead as a fitting memorial of its illustrious colonial history.

The process of dismantling and moving the cabins out of Bridgeton began in 2015, funded by a $10,000 donation from Wade Sjogren, owner of the Bridgeton-based sand company, Whibco, Inc. Each log had to be tagged and so that each cabin could be reconstructed with precision. Then, in 2019, The Swedish Colonial Society stepped forward and pledged to rebuild the largest of the cabins, a 30′ X 16′ cabin called the Main Residence. Highline Construction, an Amish-owned log-building contractor, was hired and by May 2019 the building was up and officially opened on 1st of June of that year. The total cost was $45,000.

Then the Governor of The Swedish Colonial Society, John Tepe, estimated the cost of reconstructing the remaining 6 cabins. He came up with the figure of $177,250. John wrote a grant application to the Crystal Trust of Wilmington DE for this amount and–much to everyone’s amazement–success arrived by Christmas 2019. Highline began building in Spring 2020 and–with the park closed for Covid–by September of that year finished reconstructing all 6 remaining cabins.

Today all seven cabins of the Farmstead stand proudly in the park, embraced by the surrounding community of Tinicum and Delaware County. Volunteer docents–often in period clothing–hold an open house every first Saturday of the month, from 11 AM to 2 PM. In summer we open the Farmstead during the Tinicum Farmers Markets, held every other Wednesday, 4:30 PM to 7:30 PM. We anticipate holding many special events in the coming years, like the Rambo Family 375th Reunion that was held on June 12, 2022. Christmas-time, harvest-time, and midsummer are likely celebratory seasons as well. We are just starting out, but we are conscious of having a serious mission, that of representing the achievements of the colonial Swedes and Finns who first settled the Delaware Valley, brought the log cabin to North America, and carried on peaceful trading with Native Americans. 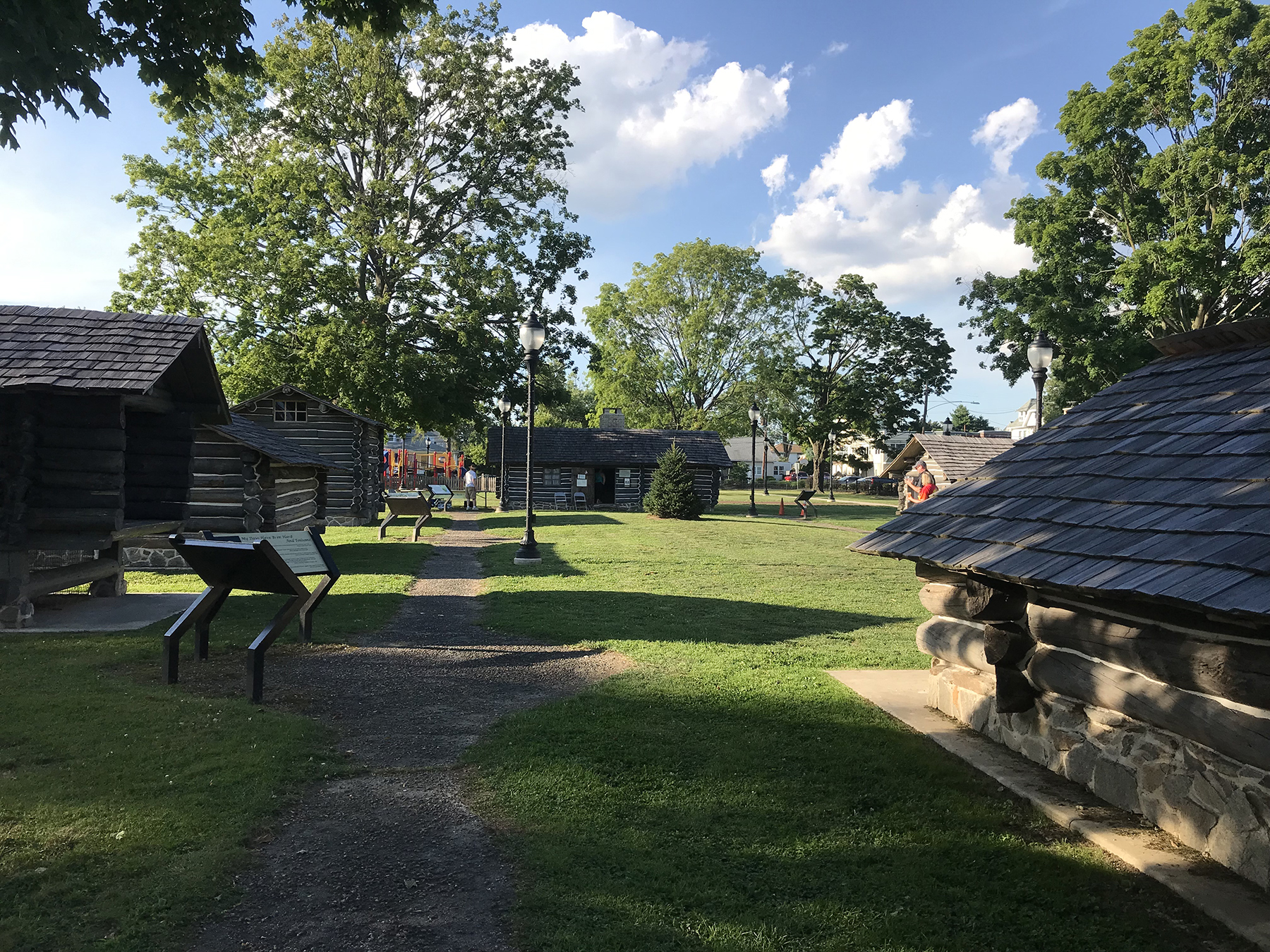 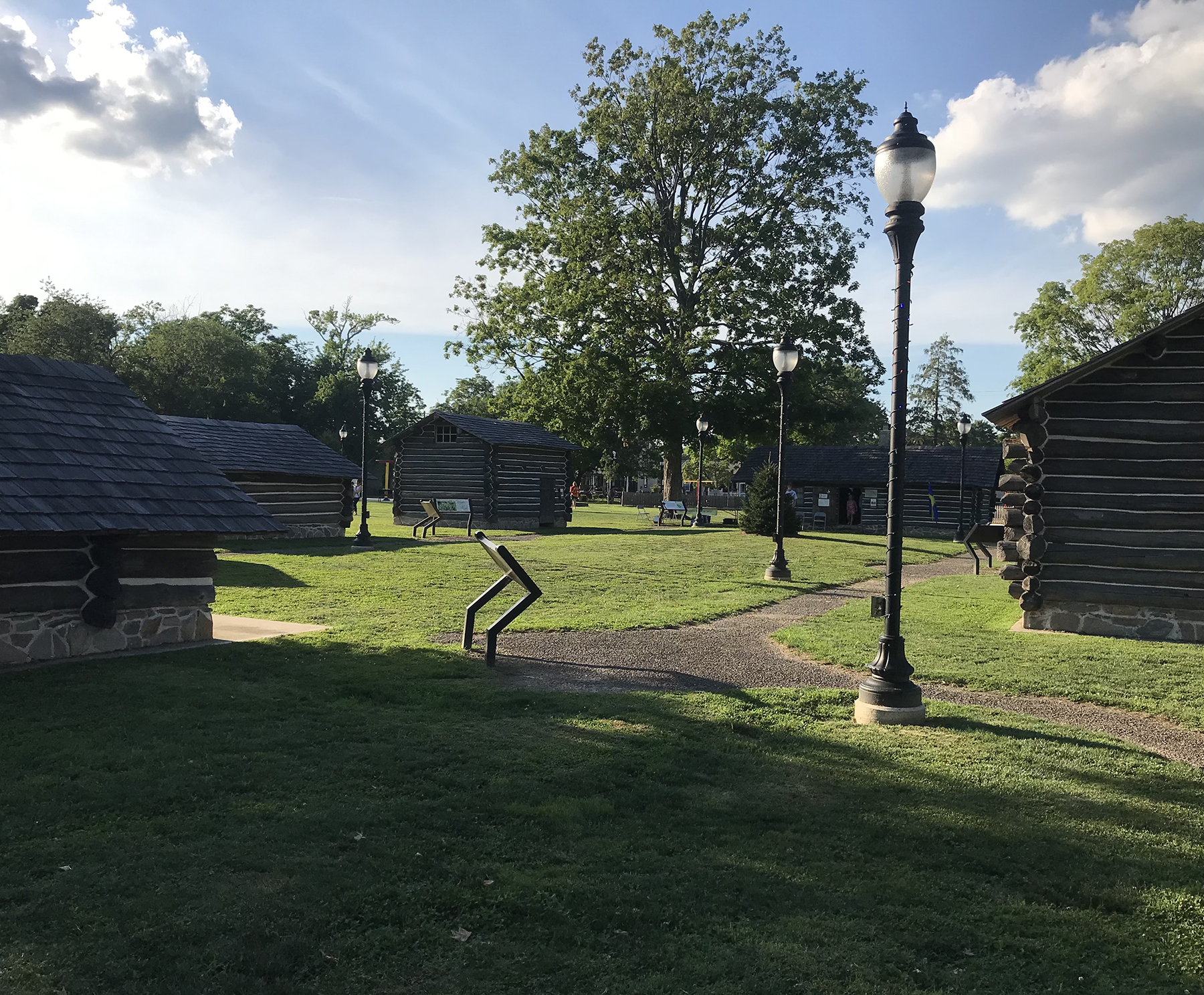 If you wish to donate to the Farmstead, you can BUY-A-LOG for $100. Your name or your organization’s name will be added to a plaque. Any contribution is greatly appreciated.

Contributions can be sent to:

What we’ve been waiting for! Just a click away!

One of the most significant aspects of the “2022 Annual Gathering” was the creation of a permanent record of the “Rambo Family 375th Reunion” made possible by the generous donation of The Rev. Dr. Cynthia Forde and Ron Beatty.

The donation also made it possible to create the first video tour of the Swedish Colonial Farmstead at Tinicum in its new location in Governor Printz Park. 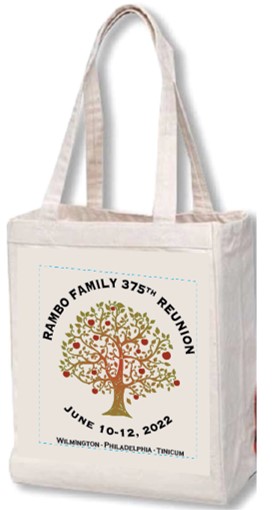 We have a very limited number of Rambo 375th Commemorative Tote Bags for sale post-reunion!

Bags are $25.00 each, including shipping and handling

Click on the button below to buy the commemorative Rambo Family 375th Anniversary Tote Bag! 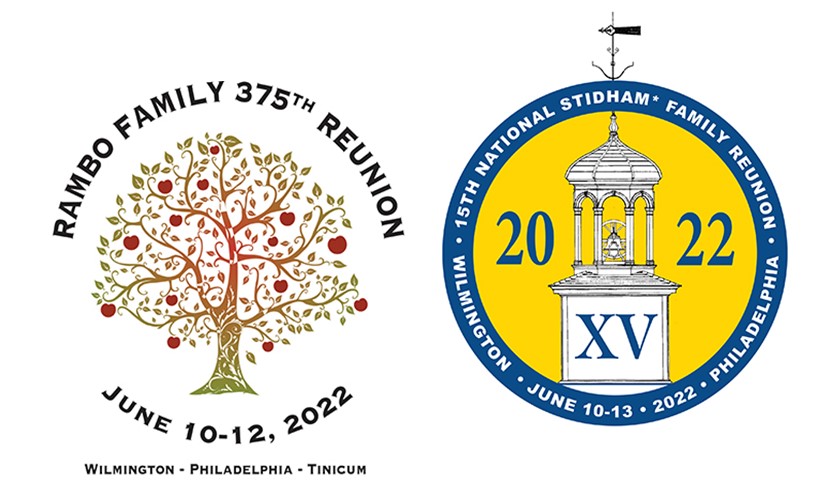 We had a great weekend and now it is great memories of a once-in-a-lifetime event. Many thanks to all those who attended and those on the committee who made the event a great success!  In the weeks ahead we will be publishing photos from the event and work on the video has begun. Check here periodically.

The Annual Gathering had three speakers. Richard Steadham’s “The Legacy of Timen Stiddem”  covered the event-filled life of New Sweden’s barber-surgeon. Dr. Forde’s topic was “Brita and the Women of New Sweden“ and their role in the colony. Of special significance was the “Life and Legacy of Peter Gunnarsson Rambo” by the chronicler of the Rambo Family, Ronald S. Beatty, author of the “Rambo Family Tree, 2nd ed.”

The Rambo Family includes allied branches Bankston, Cock, and Mattson, and others, many of whom were represented at the Reunion.

Without a doubt, living history actor and researcher Robert K. Rambo’s first-person portrayal of Peter Gunnarson Rambo in “My Life in a Very Splendid Fruitful Land” is something folks will remember for a long time. See photo below. 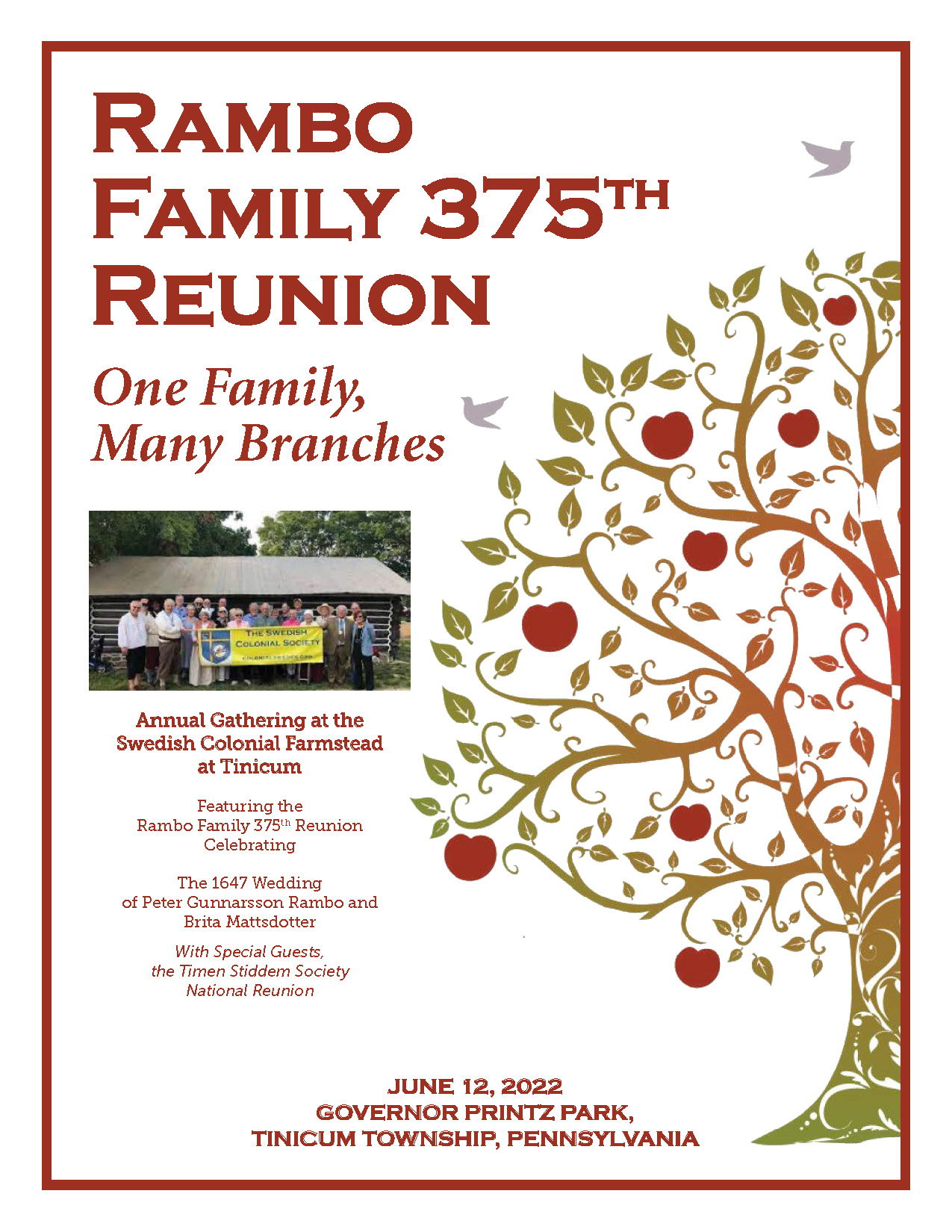 The Swedish Colonial Society Welcomes New Members. No Swedish relative or ancestry is required – only an interest in the colonial history of our nation. Membership is available for all parties interested in the history of the New Sweden Colony and the early Swedes and Finns in America. Swedish heritage is not a requirement. The four classes of Active Membership and application fees are: Individuals ($45.00) Family (Parents and children under 18 -$52.50) Organization (Business or Institution Name $52.50) Lifetime ($600.00). We do not have automatic recurring payments, set up at this time.

Our Mission is to preserve and promote the history, genealogy and culture of the New Sweden Colony in America. 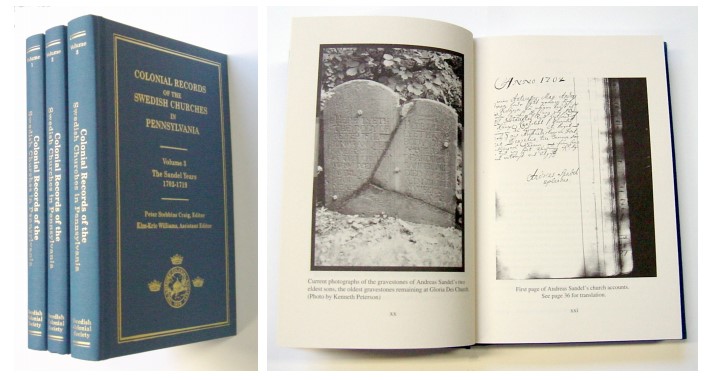 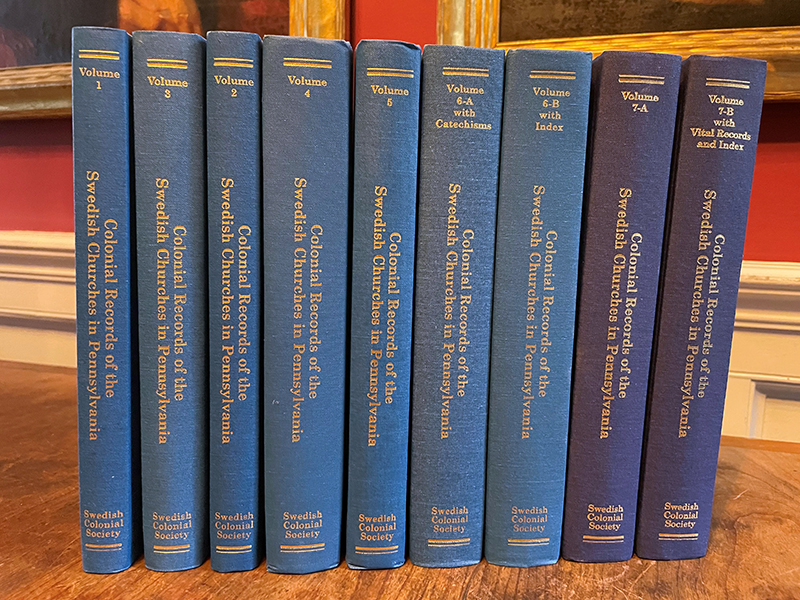 The Swedish Colonial Society is having a sale on books. The more you buy, the more you save!

Checks should be made out to “Gloria Dei Church”.

Gallery from the Opening Celebration 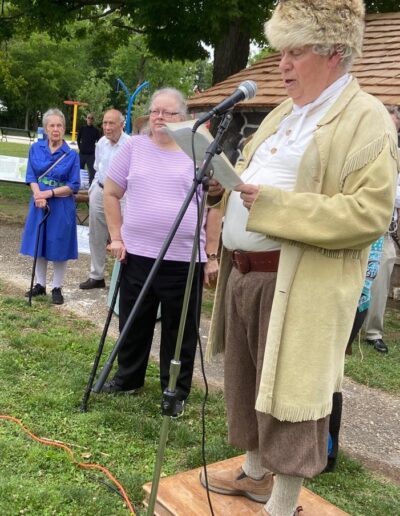 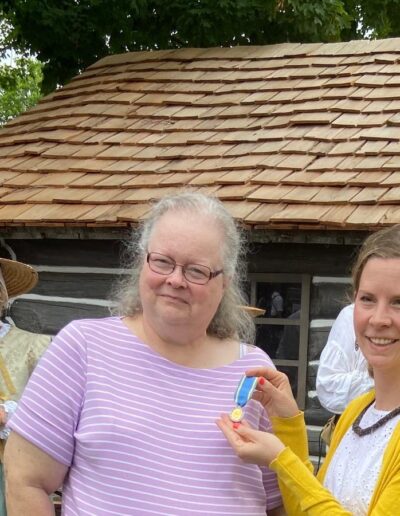 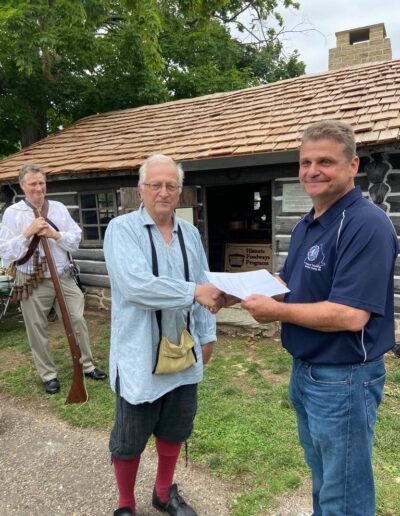 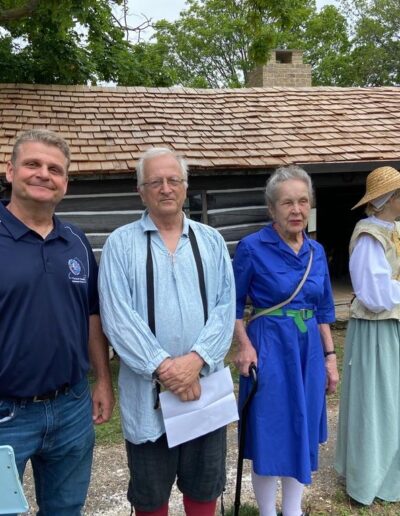 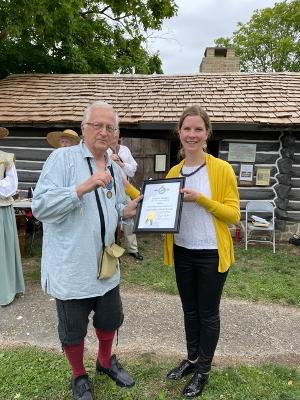 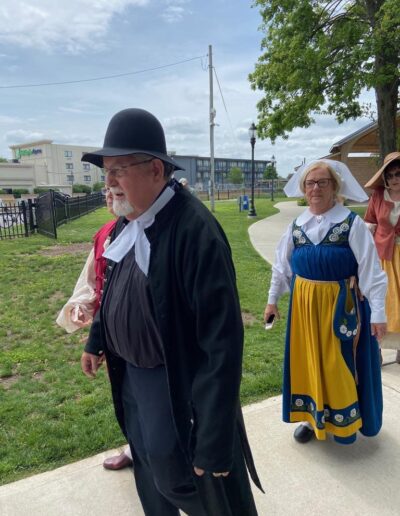 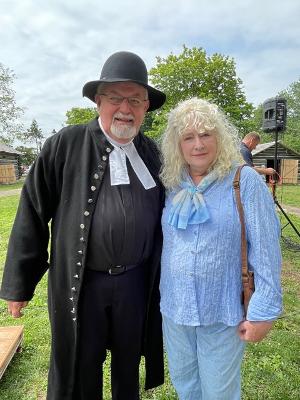 So far, the SCS New Sweden DNA Project is going very well, even better than we expected!

For those of you who have tested at Ancestry DNA or 23andMe and want to transfer your results to Family Tree DNA (FTDNA) and join the SCS DNA Project, we have good news! Now it is FREE to transfer your DNA results to FTDNA. After transferring you can unlock all Family Finder Features,which include the Chromosome Browser, myOrigins and ancientOrigins for only $19. Please email Becky Griswold, beckygrizz@yahoo.com for more information.

If you are an SCS member, you can now order a custom package of family group sheets (FGSs) showing all the detail around your earliest Swedish colonial ancestors.
CRAIG COLLECTION ONLINE

ENJOY THE BENEFITS OF MEMBERSHIP!

As a member of the Swedish Colonial Society:

Hear what our happy members have to say about the Swedish Colonial Society!

Thank you for a great presentation of the SCS Journal, Winter Issue, VOLUME 5, excellent, informative articles, well-written!  With each issue I wonder how will you top this one, and you do.  One of my favorite items is the winter photo of the Farmstead. Great job!

WOW,  The SCS Journal only seems to get better and better. An exciting layout, new visuals, lots of information, and more info about Lars Lock than anyone ever knew.

I am very proud of the SCS. The first cabin is only the beginning of the Swedish Cabins in Governor Printz Park. The rest will be coming soon. The Printzhof, located in Governor Printz Park in Essington, Pennsylvania, was the home of Johan Björnsson Printz, governor of New Sweden. In 1643, Johan Printz moved his capital from Fort Christina to Tinicum Island. At that time Fort Gothenburg was established in addition to Printz’s dwelling and headquarters.

The SCS is a wonderful path for keeping history alive. It provides a remarkable way to meet others with similar or related ancestors. Their Facebook page has interesting tidbits to enjoy and the fellowship is unprecedented. Lifetime membership is a thoughtful one of a kind bequest to a family member

The SCS resources available to New Sweden colony researchers are unmatched; Camaraderie with fellow members, distant cousins in many circumstances, an added bonus.

Your newsletter has been of interest to our family.  Thank you for the great work you are doing to keep the story and tradition alive.

I have really enjoyed the literature you have sent out since I joined.